An overview of the new fastai library

The new modules are pretty much done in the fastai_v1 repo (for the stuff that will be in fastai 1.0, we have some ideas of new features but they will have to wait for a little bit

) and here is a general introduction of how it’s built. Now we’ll focus on documentation and as we make progress you’ll get more details on each module in the doc folder of the repo.

At the base of everything are the two modules core and torch_core. They define the basic functions we use in the library, we just split the ones that use general modules from the ones that use pytorch. We also put there all the shortcuts for type-hinting we defined (at least the one that don’t depend on fastai classes defined later). Each other module usually imports torch_core.

Then, there are three modules directly on top of torch_core:

From layers, we have all the modules in the models folder that are defined. Then from data we can split on one of the three main types of data: vision, text or tabular. Each of those submodules is built in the same way with:

This takes care of building your model and handling the data. We regroup those in a Learner object to take care of training. More specifically:

Here is a graph of those relationships 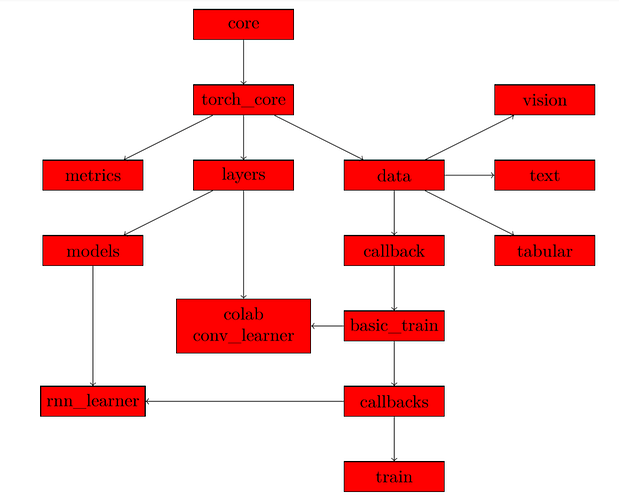